The Human Biofield is the energy and information in and around the body. The Biofield is mapped using the intuitive overlapping circle geometry.

The Human Biofield design Images, PDF & EPS will be available for download once your purchase is complete. The zip files currently include: Poster Images (300dpi JPG), Poster PDFs (A2, CMYK with and without bleed), Poster EPS, JPG Images 300x300mm small (72dpi) and large (300dpi).

According to the The Illustrated Encyclopedia of Hinduism (James G. Lochtefeld, Ph.D.) Hindu and Buddhist texts say that the chakras are arranged in a column along the spinal cord, from its base to the top of the head, connected by vertical channels. Old Buddhist and Hindu texts talk about 4 energy centres and then later 5, 7 and up to 88 000.  There is more information on Wikipedia, Britannica, Chopra.com and around the web. 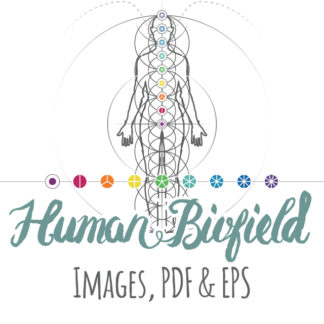