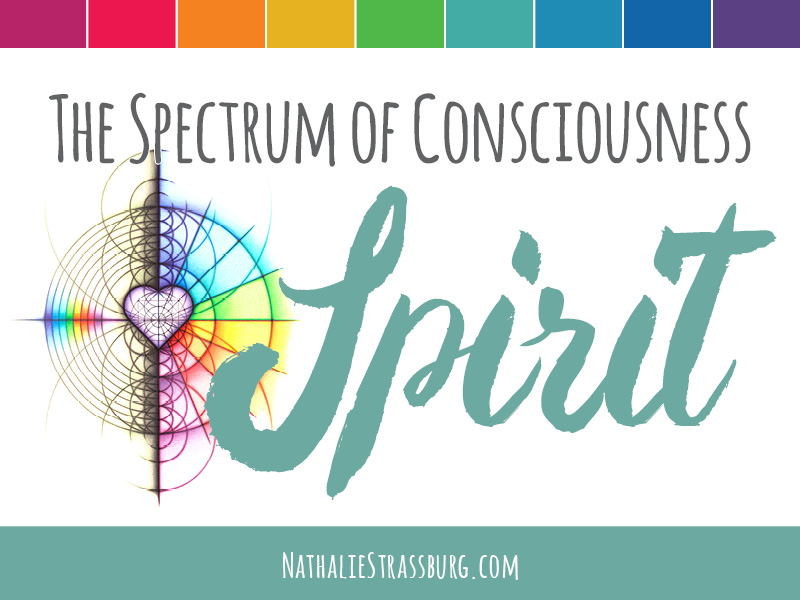 Spirit is Consciousness. Consciousness is a spectrum of light vibrating from the slowest to fastest frequency.

Consciousness is a universal thought (mind) phenomenon and it functions on all levels. Everything has consciousness, it is the one universal substance. Everything is fractals of light, even the source is a fractal of infinite sources.

Thought (mind) is the creative instrument and knowledge is the product of experience. Minds are organizers of consciousness. Experiences and knowledge is neither good nor bad since all is valuable. Consciousness records and expresses, energy absorbs and radiates.

Consciousness is programmable, at all levels, it is just the limitations that vary, akin to our human idea of artificial intelligence, except far more advanced than what we have considered, that is why we experience the illusion of time in our realities. Programming consciousness is a mental skill. The greatest manifestors (programmers, directors) of consciousness have the greatest degree of integrity.

The Spectrum of Spirit Consciousness

Consciousness is a spectrum of light vibrating from the slowest to fastest frequency. Below is a framework for understanding this spectrum, and how everything and everyone fits together.

Inanimate and slow moving objects of consciousness such as crystals, minerals, rocks, mechanical instruments, devices, other materials, and objects created and manufactured from them, even composite materials. Everything has consciousness; consciousness is primary, it is the one universal substance.

Plants, animals, insects, fish, birds, and every kind of organism, elementals, nature spirits, and light beings like fairies etc. That which we are able to see depends on our individual human design, training, life purpose etc. Most humans (and other types of races and forms) have experienced life as these types of forms, including things like rocks, because they are valuable experiences. At this level of consciousness, like animals and plants, they operate very intuitively and are always aware of their soul group.

Individualized light body fragments are incarnated into degrees of matter. These include humans, other races, and other types of bodies throughout the universes. Bodies are collections of conscious cells, just like larger light bodies are cells in the collective body of all light.

Incarnations have the same purpose as all light bodies, to experience all that which is possible to experience. All experiences are recorded knowledge, stored in countless formats, devices, and light bodies across the universes and accessible to various degrees according to desire and frequency clearance, access requires resonance, awareness, desire, and openness.

Human beings evolve through the expansion of their consciousness, which is awareness. The greater our expansion and awareness the greater the understanding and intuitive awareness of universal truths. Universal truths are the universal laws that govern all light bodies and this information is accessible to anyone that genuinely desires it, and is ready for it. Human life can be seen as the process of a light body fragment plugging into a learning environment with quests and a learning spectrum. Self-realization is the knowing in heart, mind, body, and soul that we are a fragment of the greater light body. Self-realization is the completion of the quest called self-love.

Thought forms share these dimensions of frequency. Thought forms are generated by thought and form types of symbols, cloudy energy patterns etc. that have consciousness. They move, grow, and dissipate as they are fed. Trained and gifted minds can see them, or perceive them through inner vision or intuitive knowing.

Souls, light body fragments, including guides and teachers that live in ethereal realms and dimensions vibrating faster than the matter humans are familiar with. A trained or gifted mind can see some of these dimensions and beings, this can vary from intense light shimmers to fully formed figures. The inner eye is the secondary way of perceiving these beings, dimensions, symbols, and imagery. They can also be accessed intuitively and telepathically.

Within this band of frequency there are various levels and dimensions organized by frequency. This is where the souls rest and learn between incarnations. Other beings simply live here to be of service to others without incarnating. There are help desks, learning centers, libraries, accommodations, and other places of interest. It is essentially a dimension filled with things minds have created as a stage between incarnation and pure light bodies to make it easier to transition between these states. As the earth raises her frequency the planet itself will become more of an ethereal realm, and in the future it will be inhabited by all types of light bodies who are in contact with each other to a much greater degree, and incarnation will simply be one of the options available for experience.

Higher-self, over-souls, group light bodies, light bodies and light beings that include ascended masters, creator beings, and other beings that have never incarnated into slower frequencies like matter. These over-souls are large light bodies that live throughout the universes, and they can fragment into countless fragments of light to experience whatever they desire, all simultaneously. Time has no more meaning at this level. These light bodies all communicate telepathically.

Light bodies like the suns and stars can also fragment into smaller individuations if there is a need or desire. Planets are conscious and incarnated light bodies that exist at various frequencies. These light bodies, including planets, grow, evolve, transform, and are subject to life cycles.

A planet can evolve her consciousness to include the variety of life we see on earth, including crawling and walking life forms, they are a part of her. Higher or larger light bodies simply incarnate into existing life forms on a planet. Higher light bodies can also create, seed, affect and manipulate the evolution of a planet and its life forms within the perimeters of universal law and agreement with relevant light bodies, collectives, and councils. A planet is a record of all life and thought it has experienced. Each planet has its own unique set if perimeters, rules, and therefore lessons and possibilities. What happens on a planet is not isolated to itself, or its solar system, it affects all of the universes.

Solar systems and galaxies of consciousness are light bodies that exist within proximity of each other and they are in relationships. They affect each other to a greater degree than the rest of the universe, similar to a family.

Universes are conscious collections of light bodies within a boundary. All possibilities are explored and experienced in multiple universes that exists simultaneously. Universes are also subject to life cycles, they are continuously born, and returned to source with all the knowledge they have gathered. A human body can be used as an analogy for a universe.

The sources of consciousness is the one, the all, the source of all light, the collective of all light, the central sun, or what would be considered God without any personification necessary because it contains all. It is the white light that contains the entire spectrum. All light bodies at all levels simply know the source as love and light. All light bodies eventually return to the source in a never-ending cycle.

Even the source is fractal in nature, meaning there are infinite number of sources. Light bodies are essentially sparks, rays, or cells of these sources. The whole purpose is the experience of love, the individual light body purpose is self-love, at all levels. All life is recording and expressing the spectrum of love. All knowledge is the collection of the experience in every possible way, in every degree and lack of it for the purpose of knowing. There is no such thing as death, no information (even an individual personality) is ever lost, light is energy that continuously moves through cycles and forms.